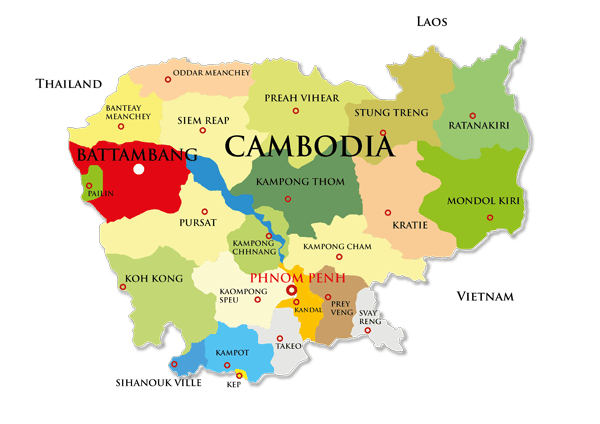 The Province of Battambang is located in Northwest Cambodia, as illustrated on the map of Cambodia above. Battambang is located in a part of Cambodia that continues to be heavily affected by landmines andordinances. The Cambodian Mine Action Authority estimated in 2011 that there are still four to six million unexploded landmines and ordnance left behind in Cambodia for future generations to deal with. Because of this more than 40,000 Cambodians have bled to death since 1979, and another 40,000 have survived a blast only to face amputations, long hospital stays and extensive rehabilitation.

Over the past three decades, dozens of local and international charity and development organizations, as well as the Royal Government of Cambodia, have responded valiantly to this crisis. However, experts estimate that Cambodia will need another 10 to 20 years to clear the land mines and only if the current level of funding for these programs is maintained.

When the Emergency Hospital first opened in 1998, there were approximately 1,000 land mine victims per year, and at least half of them were given free care at the World Mate Emergency Hospital. Today, the hospital continues to treat these victims though their number decreased to less than 200 in 2013. This is great progress, but during the same period of time, a more significant cause of trauma and death has been identified in the form of road traffic accidents.

Over the past five years, the number of road traffic accidents in Cambodia has escalated by 30% per year, due to the increasing number of car and motorcycle drivers on the country’s chaotic road system. The reduction in landmine victims has been more than replaced today by road accident victims, and because of this, more than 90% of the beds at the World Mate Emergency Hospital are occupied on an average day.

The Emergency Hospital was built in Battambang in 1998 to provide free trauma and surgical care to victims of war and poverty. A map of the campus, encompassing 22 buildings, is included in the reference materials area of this site. It was originally called the EMERGENCY CENTRE FOR WAR VICTIMS and was founded and managed by a charity organization based in Italy called Emergency. In 2011, this charity announced it had a shortage of resources and could no longer support the hospital and its work. In January of 2012 the Cambodian Ministry of Health, together with the Italian charity organization that founded the hospital, asked the Handa Foundation to consider accepting the responsibility of managing and sustaining the hospital. On March 1, 2012, all of the assets and staff of the hospital were handed over to The Handa Foundation and the initial name to be given to the facility after the handover was the HANDA EMERGENCY HOSPITAL. Finally, on April 7, 2012, the staff members of the hospital were delighted to have Dr. Handa and an international delegation arrive in Battambang to announce that instead of closing the facility in thirty days, as previously planned, the World Mate organization would now be supporting the hospital and enabling it to continue providing life-saving trauma care to the people of the region.

Thanks to the World Mate organization in Japan, free trauma care continues to be provided to land mine and traffic accident victims in Northwest Cambodia. Because of this incredible generosity, the hospital was renamed the WORLD MATE EMERGENCY HOSPITAL in 2015. However, based on a request from the Cambodian Government, the facility was renamed the HANDA TRAUMA CENTER in 2019. While the official name may have changed several times, the facility continues to provide free high-quality trauma care, and its impact on the community has been profound. The community is deeply grateful for the leadership and generosity of both Dr. Haruhisa Handa as well as the World Mate organization in Japan. Later in 2021 this website will be updated to correctly reflect the facility’s new – and hopefully final – name, the HANDA TRAUMA CENTER.

A Letter of Thanks From The Cambodian Ministry of Health

In June of 2012 the acting Minister of Health for the Royal Government of Cambodia, H.E. Professor Eang Hout, wrote the following in a letter to Dr Handa.

“On behalf of the Ministry of Health, I would like to thank you for stepping in to continue the good work of The World Mate Emergency Hospital in Battambang, Cambodia. It is a very important hospital in our healthcare system and one of the few high-quality trauma centers available in Northwest Cambodia. Keeping the hospital open is a blessing to all the people of that region.”

Because of this new beginning, thousands of landmine and road traffic accident victims continue to be nursed back to health at the World Mate Emergency Hospital each year. The nearest alternative facilities that could care for these patients, if this hospital was not operational, are more than five hours away in Phnom Penh.

In the World Mate Emergency Hospital, free care has always been given to landmine victims and to the poor. From 2013 through 2016, approximately 55% of the patients fell into this category and were treated free of charge. The remaining 45% pay for some or all of their care by making a donation to the hospital. The free care that continues to be given to patients is only possible because of the generous donations that are given by World Mate members in Japan.

Importantly, the World Mate Emergency Hospital is also a training facility for doctors and nurses and enjoys numerous partnerships across the country. The hospital is renowned for being impeccably clean, efficient in treating a high volume of trauma patients, and for having some of the lowest post-surgical infection rates in the country.

The mission of the World Mate Emergency Hospital is to provide high-quality trauma care to the general population of Northwest Cambodia, including free care and support to landmine victims and to the poor, while building the capacity of the local healthcare system.

The World Mate Emergency Hospital is a unique hospital. It is the only hospital in Cambodia exclusively dedicated to providing trauma care to landmine and road accident victims. When it was originally built in 1998, Cambodia was an extremely hazardous country, just beginning to recover from war, and for this reason, the initial focus of the hospital was to accommodate foreign surgeons who were tasked with saving and preserving as many lives as possible. 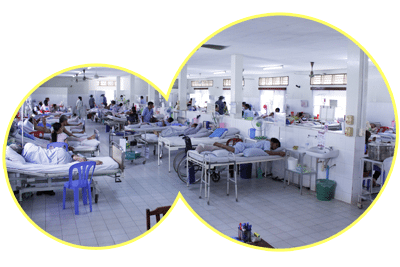 Northwest Cambodia has a persistently high demand for quality trauma care, but at the same time, the country has enjoyed more than ten years of peace. Saving lives is still a strategic focus of the World Mate Emergency Hospital. Of equal importance is the focus on the formal training of Cambodian medical professionals. The people of Cambodia will always need good medical care, and they will need their fellow Cambodian nationals to be properly trained to provide this care. The World Mate Emergency Hospital is devoted to achieving both.

Most departments of the World Mate Emergency Hospital are led by local Cambodian professionals. Many of the department leaders have worked at the hospital since it opened in 1998, and all of them work closely with the Senior Management Team.